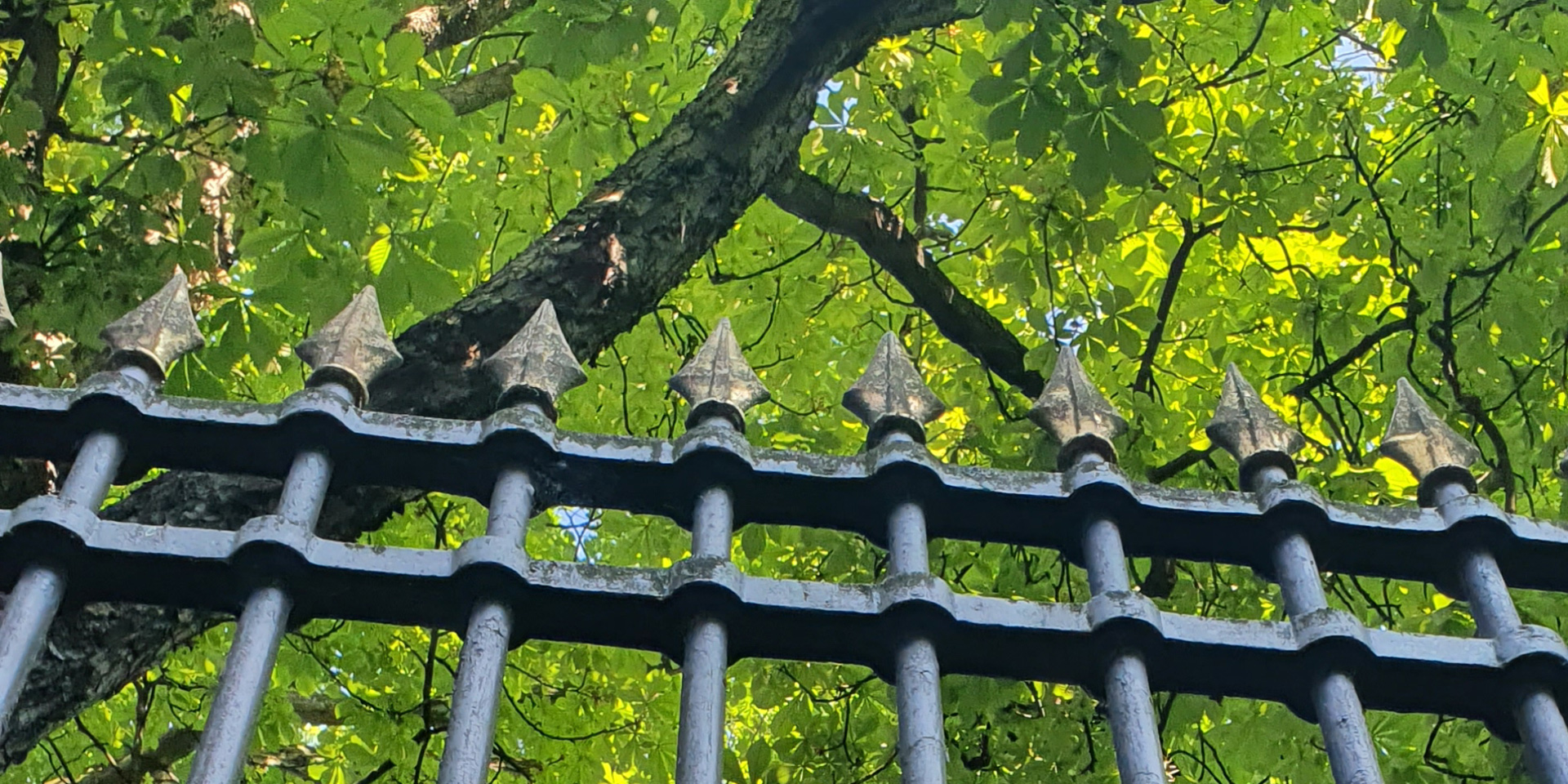 Easter Sunday. Nearly four weeks of confinement. I wake up at dawn, shower, put my T-shirt on inside out, realise it doesn’t matter. I won’t be meeting anyone today. This is solitary confinement, except for friends popping up in little Zoom boxes on the computer screen. So I go outside, with my T-shirt inside out. Another gorgeous spring day. I don’t remember a spring like it. A whole month of relentless bright sunlight and clear skies. A time to be OUT, not IN. It’s all inside out. Upside down.

I go out for my authorized one hour of exercise a day, clutching my certificate for the police, with the date and the time neatly marked. This is becoming a routine, somewhat monotonous, as is my daily route. I make a resolution to discover something NEW every day.

I walk up the Boulevard Edgar Quinet, past Le Cimitière de Montparnasse, where Serge Gainsbourg and Baudelaire lie buried. My first little flat, in Impasse de la Gaîté, was sandwiched between the cemetery and a sex shop. Eros and Thanatos. Sex and Death. They often go together, the rise of libido when death is all around: in times of war, or during the cholera epidemic in Paris described so brilliantly by the Swedish doctor and author Axel Munthe. But not in this plague. The few people I pass shuffle along like depressed shades, masked and muffled, dressed in browns and blacks, eyes downcast, as if a look could be infectious.

Then I notice a new colour code: Parisian women of a certain age in this fairly affluent quartier, are usually beautifully “coiffed”. If you can’t hide the sags or the bags or the wrinkles, you can always count on Parisian hairdresser artistes to give you a beautiful coiffure, cut and colour perfect. Now I notice a whole new breed of badger-women – all with half an inch of white roots showing before the stripe of gold, or copper, or chatain of their previous crowning glory.

My roots are the same, so I just plonk on a turquoise beret every day. I’m about to be glad of it. A pigeon perched high in a plane tree poops on my head. “Lucky,” my mother always told me, “It means you’re going to travel.” Pah! I think of the wonderful travel plans I’d made — to swim naked in the sea on the Greek island of Naxos, to walk the Lycian way in Turkey, to stay with dear friends on the edge of a lake, in the middle of a forest in Poland. All gone. One microscopic zoonotic viral leap from a bat or a pangolin in some way-off wet seafood market in China, and the whole world comes to a standstill.

I look up at the pigeon. It is happily cooing, in this strange and quiet world.

Then I see what I set out to find. Something new. Well, there they are. A pair of men’s boots, dangling very high up in the tree, in perfect symmetry, a brown boot suspended by its laces on either side of a branch. They look worn, faded, but, somehow, not discarded. As if they’re waiting for someone. As if someone has stored them up there, in an aerial wardrobe. But how did they get there? Did the owner climb twenty metres up the tree every night when he took his boots off? Will he come back for them?

A hundred yards up the road I come across a double-decker London bus, the Parisian façade of a building painted on it, with an imitation blue street plaque “Place Disponible” — literally, a Place with Room. It is called an “AbriBus” — a bus shelter for the homeless. Now it is shut. Maybe the boots belonged to one of the residents. He’s gone, like most of the rough sleepers. Strange, how quickly shelter has been found for them, a solution, albeit a makeshift one, for a problem that has seemed insoluble for decades.

Not a soul on the street on this glorious spring day, but most of the windows are open to let in a maximum of spring air. Bits of bodies poke out of each one. Here, a pair of brown feet sticking out beyond the window ledge; there, a slouched back, being warmed by the sun; here, a pair of elbows; there, a wistful pale face, like a ghost leaning towards the heat. These anonymous bits of bodies make me think of a Picasso portrait. Dismembered.

We are all in bits. What will we be like when (if) we are put back together?

In a TV interview, a journalist says: “We can’t go back to normal. Normal was the problem.”

Will this terrible virus, that is choking people to death in hospitals corridors around the world, that is denying loved ones the right to say goodbye, will it also be the agent that strips us back into our true being, that gives us back our true values? A high-flying executive who narrowly escaped death from the virus is filmed in his garden, tenderly caring for his plants, his new passion. A grounded airline pilot is working on a chicken farm, collecting eggs. He says he is thinking of changing career.

I wonder about Priti Patel, the home secretary and her immigration policy of — can it be only three months ago? — keeping out the “low skilled” and the “low paid”. I hope her room is red with her blushing. The people now keeping us alive, as well as the doctors, are the carers, the nurses, the hospital cleaners, the porters, the dustmen, the postmen, the shop assistants, the street sweepers. The key workers.

Is Covid19, as well as killing us, giving us the keys to a new and stripped-down system of values?

I remember a trip a few years back, to Outer Mongolia. In my mind, I am back there, in the Gobi desert.

There are bones everywhere. Piles of bones. Shin bones of horses, skulls of yaks, jawbones of goats.

Sometimes just there, lying in the middle of this moonscape, bleached white by the sun. Sometimes they are made into neat little piles, bright cobalt blue rags tied onto them, fluttering in the wind.

“Why do they leave all the bones?” I ask Uggi, our guide.

“To remind us of our birth,” he says.

He tells me that, in the culture of the shamans, birth comes only after a stripping down.

“Only when you have become a skeleton,” he says, “can new flesh grow on your bones.”

I like the idea. It stays with me over the years, even as I run from place to place, jump on trains and planes to islands, to deserts, to mountain ranges, I think of the skeleton, the piles of bones.

But it remains a thought-skeleton.

I will not become a real, rattling, bleached-white skeleton – no way, José – not unless I have to.

And now, I have to. The time has come.

I am stuck with myself, day after day. Nowhere to run to. Nowhere to hide. Lockdown. Solitary confinement. A plague outside. A prison within.

Certain essentials run out. My dyed dark red hair grows grey at the roots. My once-red lipsticked lips get dry and pale. I look in the mirror and see the stripping away. The end of the artifice, the beginning of the bones.

I think I can hear my ghost-skeleton jangling in my sleep. It sings: “Look at that stooopid girl."

It opens its bony fingers and throws images at me like confetti – the woman weeping into her pillow, heartbroken, for an unfaithful lover… What was his name?

What a waste of time.

The strutting performer on a tiny stage, desperate for applause. The nerves, the greasepaint, the terror… What was the name of the play?

Then the skeleton stops, puts a finger to the hollow of its mouth, and stays silent.

I hear, in the quiet, my footfall on fields, my skin cold with the shock of the dive into the mountain lake, my eyes round with wonder at dawn, at the fading of the moon and the rising of the sun.

That was all it was ever about.

The skeleton fades with the sunrise. I go about my day as slowly and quietly as the morning light that creeps into my room.

I can hear the wind in the desert that blew me into being, and will bleach me, colourless, at my end.